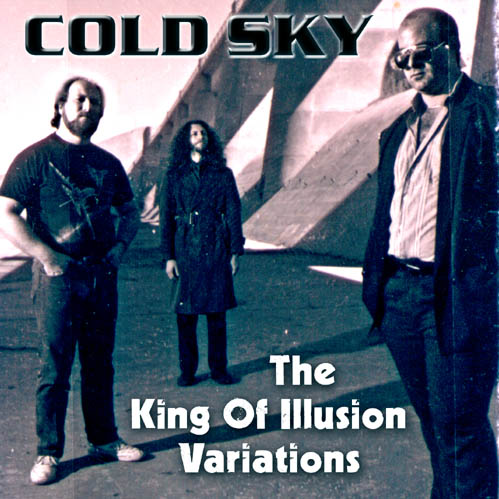 Now available for download or streaming at Bandcamp
53 minutes, 1 track.
"You Think We've Got Enough Tape?"

Going through recordings of the trio Cold Sky, I kept noticing how many partial versions there were of "King Of Illusion". Eventually I realized: the song was at the end of our set, and ran long. This meant that by the time we played it, we ran out of tape, usually in the middle of some blazing jam. As it turns out, other than at Be-Bop, we never caught a complete version. But what we did catch was us at our peak. It was very frustrating. Here I was, nearly 20 years later, trying to preserve the best moments of this band, faced with some superb fragments- how could I allow people to hear these in a way that functioned, that was (hopefully) enjoyable?

The answer was largely inspired by Robert Fripp's gonzo piece of editing called "Schizoid Men", in which he took all the best solo sections from versions of "21st Century Schizoid Man" taped during the "Islands"/"Earthbound" tour, and strung them together into one blistering CD-length slab of ear destruction. It's wonderful.

So there was a possible method. But would it work for this? Things were not tidy with the "King Of Illusion" fragments; the bits came from all over different versions of the 15 minute-plus piece. There were multiples of some sections, while others weren't represented at all. The only answer was to make a new structure.

I started by putting every possibly usable piece in its own track, playing mix and match, and by not kidding myself that I could make every edit invisible. If you can't hide it, flaunt it- seams visible! (This is one of the reasons I feel these notes are important. No BS.) Then it was time to enjoy the editing process as a method of creation.

There are three fragments included here that did not originate from KOI jams. Two were based around a couple of classic '60s psych tunes; I trimmed away the originating melodies, so what remains is pure Cold Sky jam. The third piece was a jam in 7 that eventually morphed into the KOI drum rhythm, so it was a no-brainer to include it. I used these for two reasons: a), to give the overall piece more variety, and b), to allow them to be heard, because while they didn't stand up well on their own, they worked very well here. With this CD and the two improv pieces on "In Process", all of the good recorded trio Cold Sky jams have now been released (excluding jams and solos within unreleased versions of songs like "Clear Day" and "Under The Bridge").

So... now that I've told you how the trick was done, see if you can forget that while you're listening, long enough to enjoy the illusion of the piece as a whole. (In a way, as a thing in itself, that IS the reality now.) After all, it was edited together with the same compositional sense I try to bring to my multipart, intertwining-themed studio recordings. I have always enjoyed rennovation- the act of making the "useless" vital again- but seldom as much as with these tapes. I hope you will have as much fun listening to this as I did making it.

My first idea about creating notes for “The King Of Illusion Variations” was to come up with sort of a “play-by-play” that would guide a listener through the music’s many twists and turns, pointing out all the highlights and adding one of the players’ perspectives on the whole thing. Well, that turned out to be an impossible task, because every time I sat down and tried to do it I found myself simply getting carried-away by the music; I wound-up never writing anything about the last 45 minutes or so of it. The piece would end, I’d look down at my notes, and I’d make an appointment with myself to try it again. And each time I listened, the same thing happened: I just got lost in the music. This illustrates just how brilliantly Greg has been able to craft so many disparate elements, recorded at many different times (and perhaps even at many different places) into such a cohesive single musical entity; one that lives and breathes on its own four feet.

So the only advice I have for the listener is to make sure that you have enough time to listen to all of “The King Of Illusion Variations” in one sitting, and be ready to give yourself over to the music. Each journey you let it take you on will land you at a different destination.